How to create a persona, based on research, educated assumptions, and real experiences. to help you in digital ministry.

Best practices and key tips as you get started in the world of social media for ministry.

A content journey is taking your user through a digital journey, step-by-step, going from one call to action (CTA) to another.

Analytics can help you see where God is at work in people’s lives online, and evaluate the effectiveness of your digital efforts.

Put It All Together

Marketing to Expand Your Reach

This section provides training and resources to help you grow in your marketing capabilities.

Find playbooks for using and leading with analytics, webinars, and step-by-step guides for using our Cru analytics tools.

Find helpful resources to help you get started with Adobe Campaign and to run your first email campaign.

Find helpful resources to help you get started with the right Learning Management System (LMS) to fit your training needs.

Worksheets and diagrams to help you plan your strategy

What does THAT mean? Find the answer here!

How we define and measure fruitfulness in the digital ministry context

Directory of the supported apps and sites we use for ministry

We know you are passionate to use the power of digital tools to connect people with Jesus. You want to meet people where they are. Now that you have your goal from lesson 1, the next step is to know your audience by creating a persona. Watch the video to learn more!

Download and edit this PDF worksheet for creating a persona.

Take some time to create your persona, based on research, educated assumptions, and real experiences. This is an essential step in any digital strategy!

Use your persona regularly and be sure to update it as you learn more. Be sure to identify any assumptions about your persona that need to be validated or invalidated.

And lastly, fall in love with your persona!

The Russia team conducted surveys with students involved in SLM during their summer break, in order to create a persona for a believing student called Olya.  After doing their research, they found that some of the content they thought would appeal to Olya (for example, a video Key Volunteer Challenge) was not an appropriate first step to engage her.  She needed to become familiar with who they were to understand why they were engaging her.

While their Olya represents a desired audience for SLM, they believe that most often, a believing student that they meet for the first time is most likely not actively trying to share their faith. Usually, students become mission-minded after engaging with their ministry for some time. They need a different kind of first step to help engage Olya.

Creating this persona was essential for the team, not only to better understand their audience and see where their assumptions weren’t necessarily true, but also to find better ways to engage with their key audience.

Here is another example of a simple persona created by a different team: 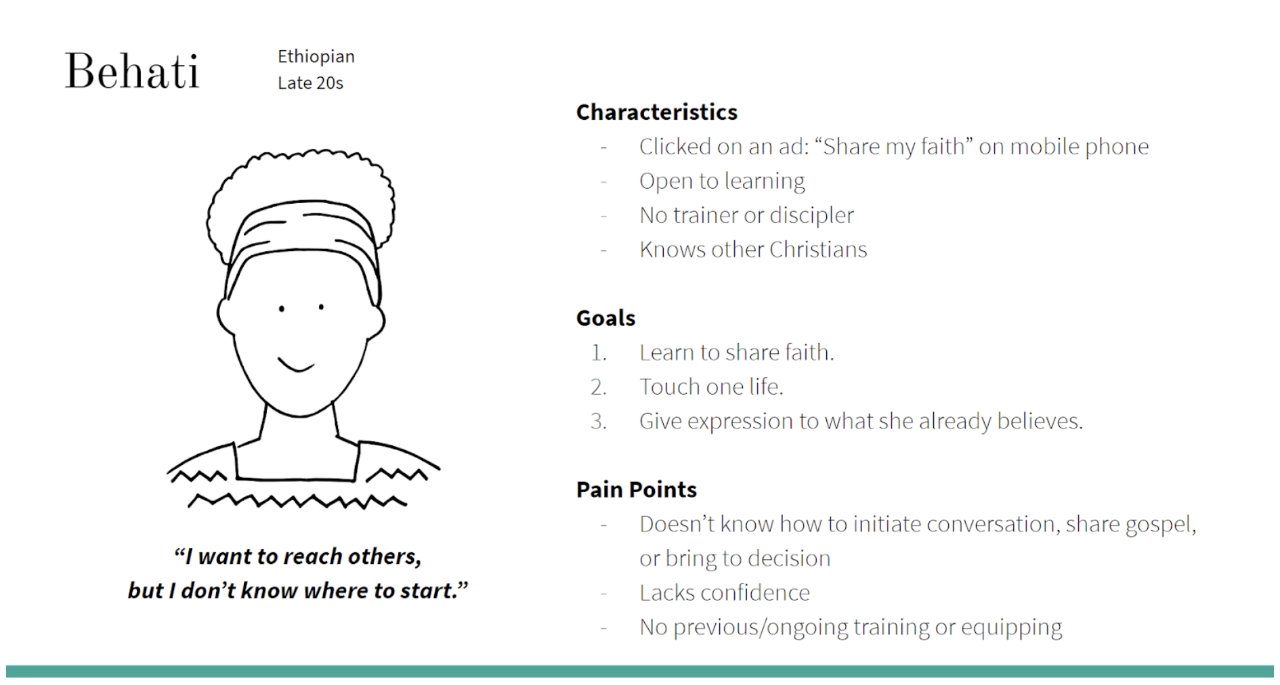 A guide to best practices and key tips

Begin with the end in mind using SMART goals